Jason Sudeikis is ready for a big night for team Ted Lasso at the 2021 Emmy Awards!

The actor and producer of the hit Apple TV+ comedy spoke with ET's Nischelle Turner on the red carpet ahead of Sunday's awards where he marveled at the record-breaking 20 nominations Ted Lassoscored for its first season.

"They're not all me, that's representing the show," he said. "Which I really like. It's a show about a team, what better way [to celebrate] than a bunch of opportunities for a bunch of people to win?"

Ted Lasso also earned nominations in writing, directing, casting, production design, sound editing and mixing and main title design, breaking the record for most nominations for a comedy series in their first season, previously set by Glee in 2010.

"It's a good group," Sudeikis said of the massive group of Ted Lasso nominees represented at this year's Emmys. "What I'm really excited about, one of the best things about this, aside from getting to see folks in person and whatnot, is seeing all of our writers all gussied up... If anyone's gonna be partying on our behalf -- if they haven't already started -- it would be our writers."

The show -- which is based on a character Sudeikis originated in a series of ads for NBC Sports' coverage of the English Premier League in 2013 -- has become beloved by fans for its endearing cast of characters and the titular coach's positive outlook on life, which seems to buoy everyone around him. The producer and star said that he's thrilled the timing was right for a feel-good show, especially this year.

"There's definitely the point of view and philosophy of the character, and that's sort of sprinkled throughout the show, but we had no idea that people were gonna be so wonderfully thirsty for it, and keep wanting to go back for refills," Sudeikis remarked.

The Saturday Night Live alum looked sharp at Sunday's awards in a teal suit and black bow tie (a contrast to his infamous awards show hoodies from earlier this year), but he didn't spend his day in Emmys glam. In fact, Sudeikis told ET that he spent his Emmys morning at the car wash, "listening to Jack Harlow and sent texts to people that I need to get back to."

"I mean, car wash and toilet, when you have two kids, that's the only time you have to yourself!" he added with a laugh.

It's an especially celebratory week for Sudeikis, who had his 46th birthday on Saturday. He told ET that his kids -- son Otis and daughter Daisy, whom he shares with ex Olivia Wilde -- helped him celebrate in discordant fashion.

"They woke me up yesterday, they did the birthday song, which we bought the rights to," he joked. "Not in harmony, but you know...They're seven and five, but you know, they should be able to find a harmony."

The 2021 Primetime Emmy Awards, hosted by Cedric the Entertainer, will air live Sunday, Sept. 19 at 8 p.m. ET/5 p.m. PT on CBS and Paramount+. In the meantime, stay tuned to ETonline.com for complete Emmys coverage.

2021 Emmys: How to Watch all the Nominated Series 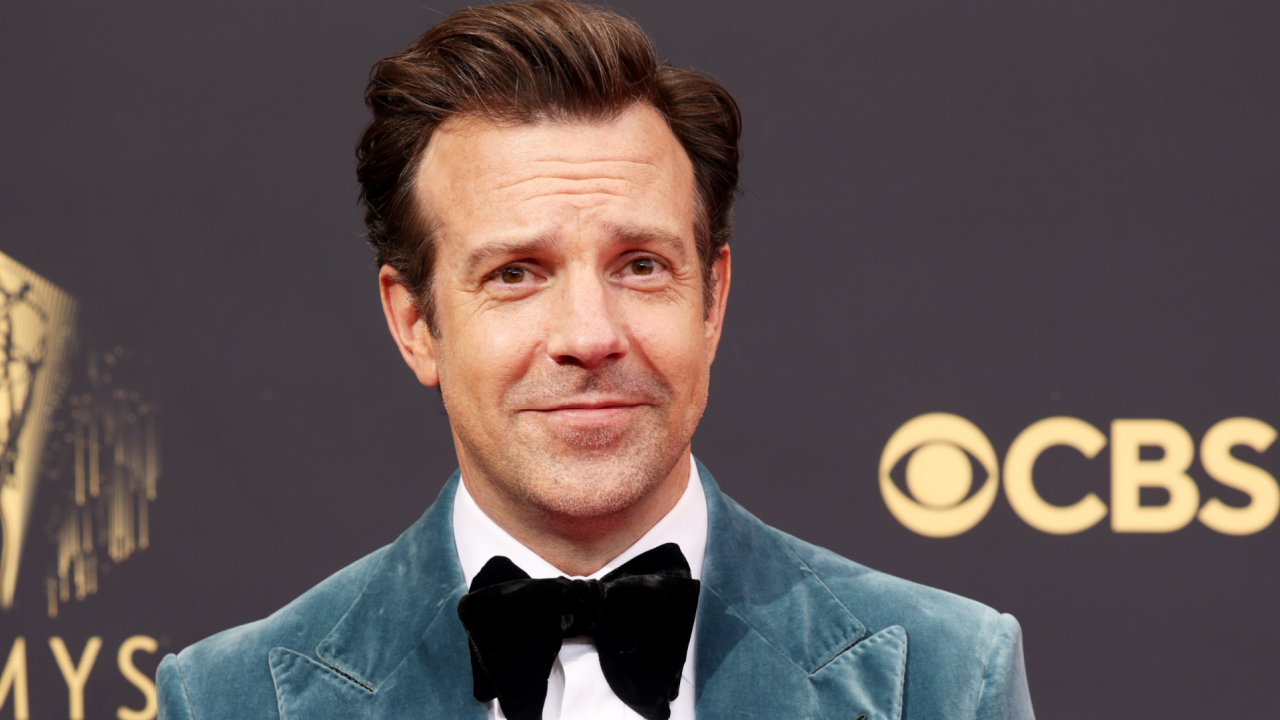 It's no surprise that girls play football. But when Arcadia High School's football coach asked three sophomores to consider joining the team, it came as a bit of shock.

Jason Sudeikis made a statement with his latest outfit choice. The 45-year-old actor stepped out in West Hollywood, California, on Thursday for the season 2 premiere of his Apple TV+ series, Ted Lasso.Sudeikis sported a black T-shirt to the event that featured the first names of Jadon Sancho, Marcus Rashford and Bukayo Saka, the Black soccer players on England's team who faced racist abuse following their team's Euro Championship loss to Italy last weekend.Though the men helped carry the England team through the tournament, the racist abuse began after they missed penalty shots in the match against Italy.At the premiere, Sudeikis, who plays a soccer coach in England on Ted Lasso, shared with ET's Lauren Zima why he felt compelled to support the athletes. "Oh gosh, [I wore it] because I think those young fellas are amazing," he said of the soccer stars.VALERIE MACON/AFP via Getty ImagesVALERIE MACON/AFP via Getty ImagesSeveral of Sancho, Rashford and Saka's teammates previously spoke out against the racist abuse they faced, with one writing that the team doesn't "want" fans who participated in the "vile" comments, and another saying the abuse "sickens, but doesn't surprise" him.Jason SanchoJay Barratt - AMA/Getty Images)Marcus RashfordNick Potts/PA Images via Getty ImagesBukayo SakaGES-Sportfoto/Getty ImagesPrime Minister Boris Johnson also spoke out against the racist attacks at a news conference."To those who have been directing racist abuse at some of the players, I say, 'Shame on you, and I hope you will crawl back under the rock from which you emerged,'" he said. "This entire team played like heroes."Prince William, who is the President of the Football Association's statement, likewise condemned the racist abuse the players were subjected to."I am sickened by the racist abuse aimed at England players after last night’s match," the Duke of Cambridge's statement, which was posted to his Twitter account, read. "It is totally unacceptable that players have to endure this abhorrent behaviour. It must stop now and all those involved should be held accountable. W."The duke attended the match with his wife, Kate Middleton, and son, Prince George. Watch the video below to see more on the royals' sporty outing.Season 2 of Ted Lasso premieres July 23 on Apple TV+.RELATED CONTENT:Prince George Is England's Cutest Fan With Prince William and Kate Middleton at the Euro FinalsThis video is unavailable because we were unable to load a message from our sponsors.If you are using ad-blocking software, please disable it and reload the page.Jason Sudeikis Gushes Over Gift Daughter Daisy Made Him for PremiereJason Sudeikis Opens Up About Olivia Wilde BreakupJason Sudeikis and 'Ted Lasso' Co-Star Keeley Hazell Show Some PDA

Members of England's national soccer team are speaking out against racist abuse directed at three Black players after England's loss to Italy in the European Championship finals Sunday night. Marcus Rashford, Jadon Sancho and Bukayo Saka helped carry the England team through the tournament, but they missed penalty shots in the final match against Italy, and have been the targets of a torrent of racist abuse online."Three lads who were brilliant all summer had the courage to step up & take a pen when the stakes were high. They deserve support & backing not the vile racist abuse they've had since last night. If you abuse anyone on social media you're not an @England fan and we don't want you," England's team captain Harry Kane tweeted."Seeing my brothers being racially abused for being brave enough to put themselves in a position to help this country, is something that sickens, but doesn't surprise me. We have literally made history. We've gone where no one else has gone. Take that in," said Tyrone Mings, another England team player.The manager of the England team, Gareth Southgate, called the abuse "unforgivable," and London's Metropolitan Police said they would investigate."We are aware of a number of offensive and racist social media comments being directed towards footballers following the #Euro2020 final. This abuse is totally unacceptable, it will not be tolerated and it will be investigated," the police said in a statement on Twitter.Prime Minister Boris Johnson and Home Secretary Priti Patel, who both made statements condemning the abuse after the final, are being accused of hypocrisy.England's soccer players started taking the knee at the start of matches in March last year, after the killing of George Floyd in the United States and the growth of the Black Lives Matter movement. Throughout the European Football Championship tournament, players from the England team continued to take the knee at the start of matches to protest racial inequality. Sometimes spectators could be heard booing the gesture. Earlier in the tournament, Johnson was criticized for not immediately condemning the booing, though he eventually said the crowds should "cheer, not boo."Patel, however, whose role in the government puts her in charge of law enforcement, said she didn't support players taking the knee, and that people should have the right to boo it. "I just don't support people participating in that type of gesture, gesture politics, to a certain extent," she said earlier this summer.After the England players were subjected to racist abuse online following the Sunday match, Patel put out a statement of condemnation."I am disgusted that @England players who have given so much for our country this summer have been subject to vile racist abuse on social media. It has no place in our country and I back the police to hold those responsible accountable," she tweeted on Monday.But England player Mings said Patel was being inconsistent."You don't get to stoke the fire at the beginning of the tournament by labelling our anti-racism message as 'Gesture Politics' & then pretend to be disgusted when the very thing we're campaigning against, happens," Mings said.Other members of Johnson and Patel's conservative party made similar statements."Priti -we as govt, as @Conservatives need to think about our role in feeding this culture in our country," Baroness Sayeeda Warsi, a member of the House of Lords and former co-chair of the Conservative Party, tweeted. "If we 'whistle' & the 'dog' reacts we cant be shocked if it barks & bites. It's time to stop the culture wars that are feeding division. Dog whistles win votes but destroy nations."Late on Sunday and early on Monday, some supporters tried to drown out the online racist abuse by flooding the three players' Instagram accounts with positive comments, and reporting the abusive ones.Twitter reportedly said it had deleted over 1,000 tweets and suspended a number of accounts."The abhorrent racist abuse last night has absolutely no place on Twitter," a spokesperson said, according to media reports.Facebook, which owns Instagram, said in a statement that "it quickly removed comments and accounts directing abuse at England's footballers last night and we'll continue to take action against those that break our rules," according to reports.A mural of England player Marcus Rashford in his home neighborhood of Withington, Manchester, was covered in positive messages of support on Tuesday after it was vandalized following the match."The messages I've received today have been positively overwhelming and seeing the response in Withington had me on the verge of tears," Rashford said on Instagram. "The communities that always wrapped their arms around me continue to hold me up. I'm Marcus Rashford, 23 year old, black man from Withington and Wythenshawe, South Manchester. If I have nothing else I have that."This story was originally published by CBS News on July 13, 2021 at 9:34 a.m. ET.RELATED CONTENT:Prince William Denounces Racist Abuse Against Team England PlayersPrince George Is England's Cutest Fan at Euro FinalsPrince George Is England's Cutest Fan With Prince William and Kate Middleton at the Euro FinalsThis video is unavailable because we were unable to load a message from our sponsors.If you are using ad-blocking software, please disable it and reload the page.

A 21-year-old University of Cincinnati soccer player drowned in a state park in Ohio over the weekend, authorities said.

Three years after the FCKC women's professional soccer team was shuttered, the Utah Royals of the National Women's Soccer League is now relocating to Kansas City, the league announced Monday.

Teen soccer player dies after colliding with another player on field

Teen soccer player dies after colliding with another player on field

A 13-year-old goalkeeper has died after colliding with an opposing player during a match in a Dutch youth soccer match.

Sporting Kansas City forward Johnny Russell has been voted the Alcatel Major League Soccer Player of the Week for week eight of the 2018 season.