The Voice season 21 semifinals are here -- and it's time to vote for the artists you want to see in the finale!

On Monday, each of the Top 8 singers are taking the stage for brand new live performances, in the hopes of winning America's vote and moving on to next week's season 21 finale. Coaches Blake Shelton, Kelly Clarkson, John Legend and Ariana Grande are able to offer critiques during the live shows, but the final competitors will be determined by the viewers.

Fans can vote for their favorite artist, starting Monday night at 5 p.m. PT/8 p.m. ET, by using The Voice's official app, or voting online at NBC.com/VoiceVote. (Voting is open until Tuesday morning at 4 a.m. PT/7 a.m. ET.) The top artists will be announced on Tuesday's live show and will continue on to next week's shows.

At the start of this week, defending champion Blake has gained the season 21 advantage, with three singers remaining in the competition. Team Kelly and Team Legend have two apiece, while Team Ariana is down to her final competitor.

Check out all of the Top 8 live performances below, and vote for your favorite on The Voice app, or online at NBC.com/VoiceVote.

The Voice airs Mondays and Tuesdays at 8 p.m. PT/ET on NBC. See more from this season in the video below! 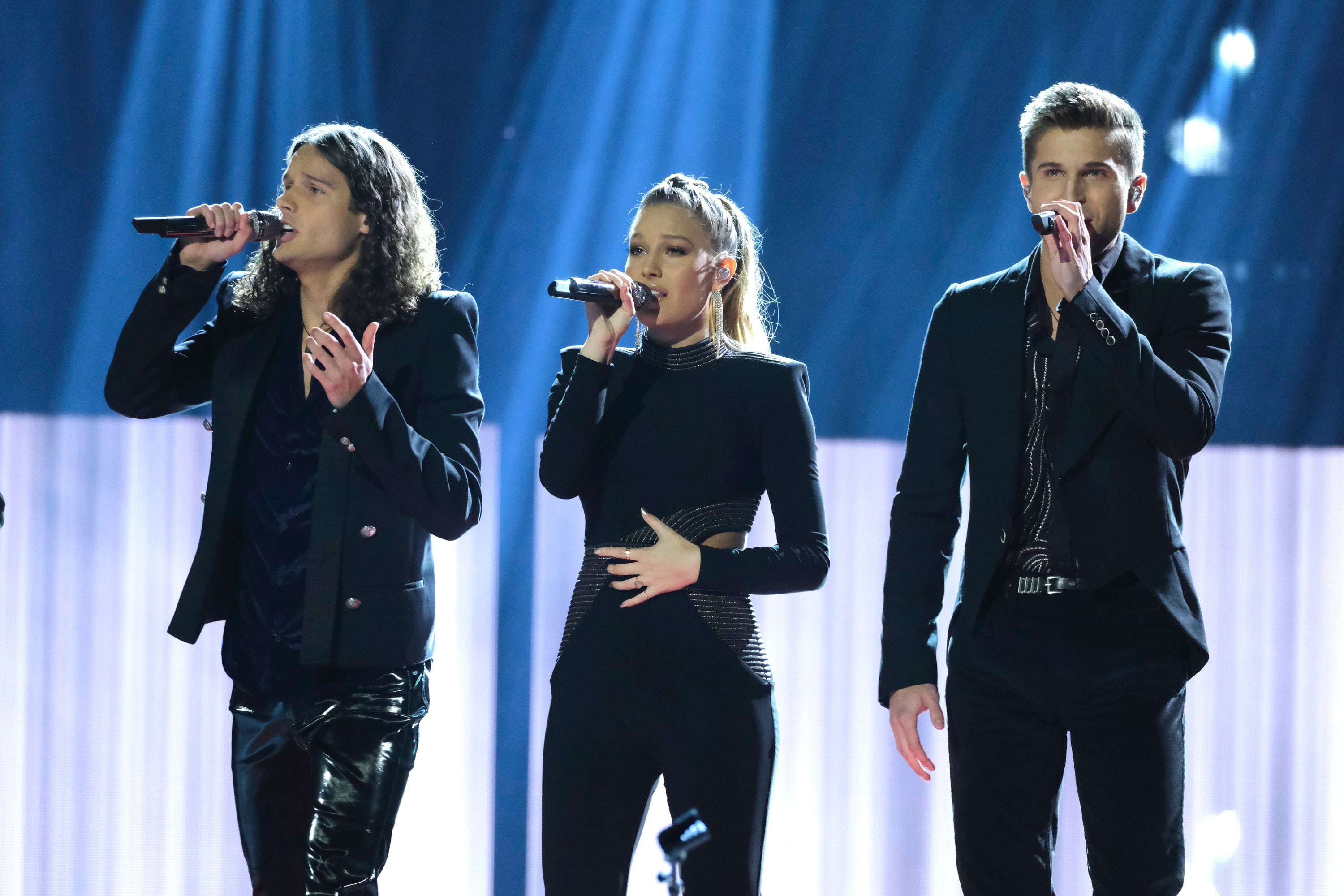 'Masked Singer': The Mallard & The Caterpillar Get Pecked In Group B Semifinals Double Elimination!

The competition on season 6 of The Masked Singer is truly heating up! Wednesday's Group B semifinals saw not one but two costumed contestants get the boot.

This week, The Queen of Hearts, The Mallard, Banana Split and The Caterpillar all took to the stage to give it their best shot. However, despite a fun country classic from The Caterpillar and a crowd-pleasing pop-rock performance from The Mallard -- they couldn't stave off elimination.

The first contestant to get his wings clipped was The Mallard. While his high-energy rendition of Sugar Ray's "Fly" got the crowd on their feet, it wasn't quite enough to keep him in the game.

Before the unmasking, the show's panel of celebrity "detectives"  -- including Robin Thicke, Nicole Scherzinger, Ken Jeong and Jenny McCarthy, as well as guest panelist Cheryl Hines -- made their final guesses. The guesses proved to be truly all over the place -- ranging from Jason Aldean to Dog the Bounty Hunter to George Foreman -- and none were even close.

After the traditional chant of "Take It Off!" The Mallard revealed himself to be none other than Duck Dynasty star Willie Robertson!

Robertson laughed at the myriad of suggestions and admitted that performing on the show was "one of the hardest things I've ever done!"

After The Mallard flew the coop, the audience voted again and The Caterpillar ended up getting stomped out of the competition.

The slew of panelists guesses were just as wild and far-ranging as they were for The Mallard -- including Owen Wilson, AJ McLean and Jim Parsons -- and not one of the panelists came close.

The Caterpillar, it turns out, was Queer Eye star Bobby Berk!

The panel were absolutely blown away by his unmasking, and couldn't believe how talented of a singer he truly is.

"Thank you guys for being out there in the world and entertaining people. More than ever we need amazing people like you who make us smile," Berk told the panel. "No matter how stupid some of the things you say are, they make us smile!"

This means fans will see The Queen of Hearts and Banana Split face of against The Skunk and The Bull as this heated season of The Masked Singer continues.

Check out the gallery below for a look at every single contestant who has ever had to "take it off" over the past five seasons of the show!

'Masked Singer': Pepper and Jester Get Roasted in Double Elimination

'The Masked Singer' Is Going on Tour! 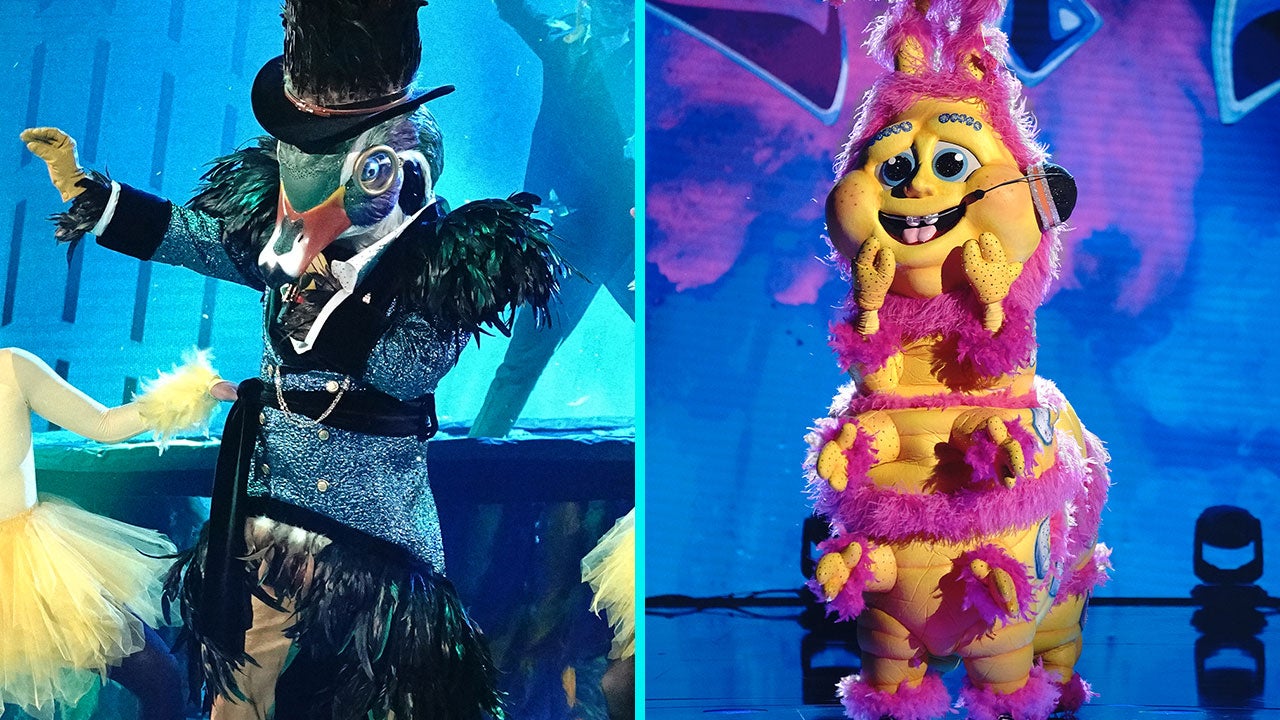 'Masked Singer': The Pepper and The Jester Get Roasted in Surprising Double Elimination!

The competition on season 6 of The Masked Singer is truly heating up! Wednesday's Group A semifinals saw not one but two costumed contestants get the axe.

The first contestant to get the axe was The Jester. After his unique performance of "I Am a Man of Constant Sorrow" didn't quite connect with the audience, the nightmarish clown got the boot.

Before the unmasking, the show's panel of celebrity "detectives"  -- including Robin Thicke, Nicole Scherzinger, Ken Jeong and Jenny McCarthy, as well as guest panelist Will.i.am -- made their final guesses. Unsurprisingly, nobody got it quite right.

The Jester removed his freakish mask and revealed himself to be none other than punk rock icon Johnny Rotten of The Sex Pistols!

The second elimination of the night appeared to be a much closer call, as The Skunk, The Bull and The Pepper were all looking to stave off elimination.

Even after her stunning rendition of Harry Styles' "Sign of the Times," The Pepper still got cut by the audience votes.

Again, the panelists made their finals guesses -- only this time, Scherzinger hit the nail on the head with her impressive guess of Natasha Bedingfield!

The "Unwritten" songstress unmasked to the delight of the audience -- and to the complete shock of Jeong. Earlier in the episode, Jeong was so confident that The Pepper was Sara Bareilles that he even slammed the Take It Off buzzer! However, since he was wrong, he lost the few points he had in this season's race for the Golden Ear Trophy.

Meanwhile, The Bull and The Skunk managed to stay in the game. The Bull kicked the night off with an incredible performance of "Rain on Me" by Lady Gaga and Ariana Grande, while The Skunk closed out the show with a flawless rendition of Etta James' "At Last."

The Masked Singer returns with the Group B semifinals on Wednesday at 8 p.m. ET/PT on Fox!

Meanwhile, check out the gallery below for a look at every single contestant who has ever had to "take it off" over the past five seasons of the show!

'The Masked Singer' Is Going on Tour! 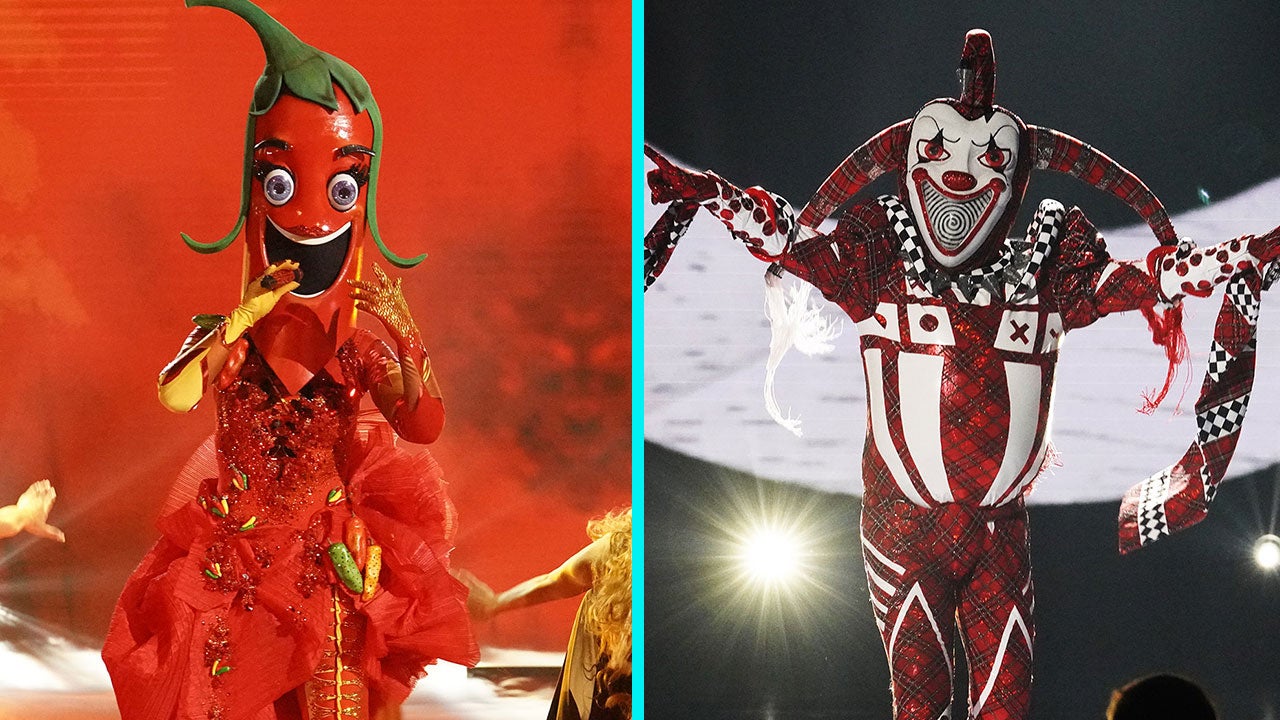 'America's Got Talent': Surprising Semifinals Results Show Reveals the Last Acts Moving on to the Finals

The last five slots for the finals of this season of America's Got Talent have now been filled! Wednesday's live results show revealed who is moving on, and who's AGT journey came up just short of finals glory.

After the second night of the semifinals round, Wednesday's results show proved to be fairly surprising from the start!

The night began as host Terry Crews announced the three acts who were "on the bubble," in fourth, fifth and sixth place in the total vote count. This included the spectacular quick change artist Lea Kyle, the unicycle dance crew UniCircle Flow, and 9-year-old opera prodigy Victory Brinker.

These contestants -- who were all considered to be some of the best acts of the night on Tuesday -- would be the acts eligible for the audience vote instant save and the judges' save. But the results would have to wait until the other outcomes were announced.

Crews then revealed the contests who would be performing one last time in next week's finals, and which acts would be sent packing.

The first act to make it through was Howie Mandel's Golden Buzzer recipients, the inspiring Northwell Nurse Choir. The singing group was followed into the finals by singer Brooke Simpson -- who closed out Tuesday's show with a powerful cover of Ed Sheeran's "Bad Habits" -- and finally stand-up comedian Josh Blue, who delivered a hilarious set that earned him a coveted spot.

The night finally came down to the acts in jeopardy, and America chose to save Lea Kyle! The final slot then went to the winner of the Judges' Save vote, which eventually went to Brinker, who wowed the world with her big voice and beyond-her-years stage presence. Unfortunately, this meant the end of the road for the undeniably talented UniCircle Flow.

ET's Matt Cohen spoke with the judges on Tuesday after the semifinals, and they shared their thoughts on the acts that impressed them the most.

For Mandel, it was comedian Josh Blue who impressed him the most with his ability to interact with the audience and thrive under the pressure of being in the semifinals.

"He is absolutely incredible. Tonight he ruled it was like his game and I think he could be the first comedian without a ventriloquist dummy on his arm to win this whole thing," Crews marveled.

The two-part America's Got Talent finale airs Tuesday and Wednesday at 8 p.m. ET/PT on NBC. Check out the video below to hear more from the judges about this season's live quarterfinals rounds.

'AGT' Judges React to Finally Having a Live Audience Again

'America's Got Talent': Best and Biggest Moments of 2nd Semifinals!

'America's Got Talent': Best and Biggest Moments of 1st Semifinals!

'America's Got Talent': Best and Biggest Moments of 3rd Quarterfinals! 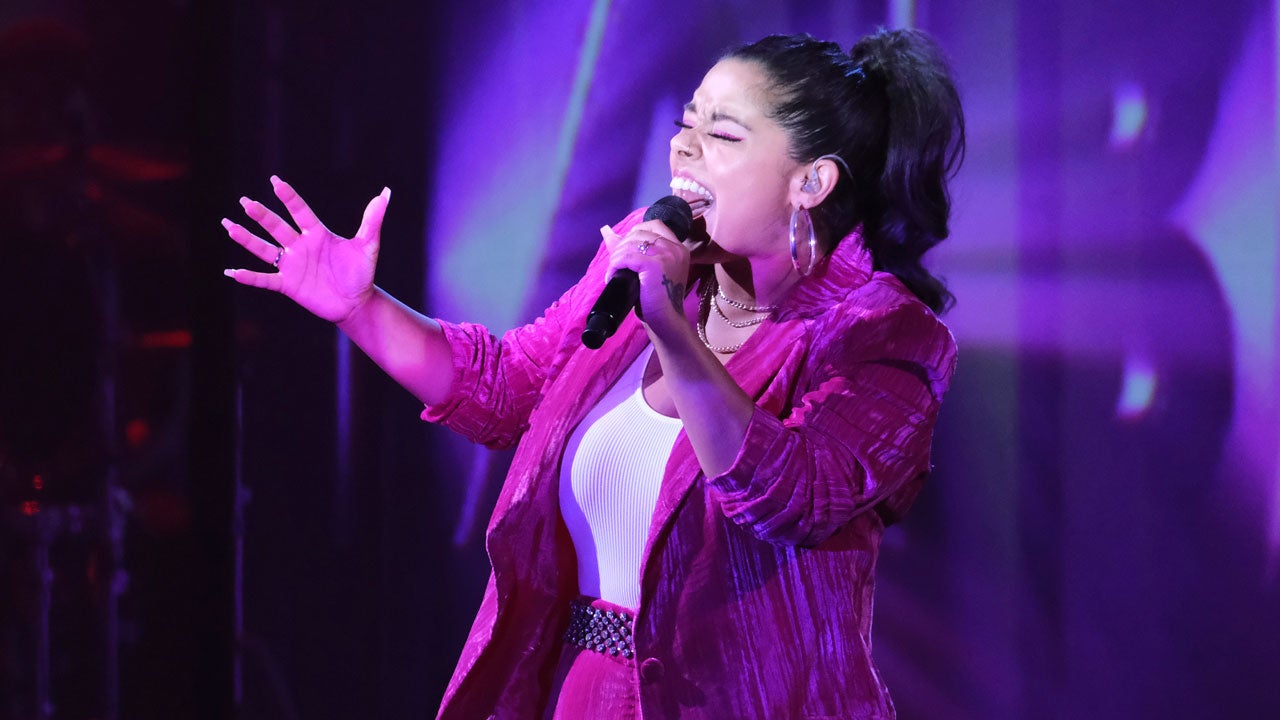 The 2020 Tokyo Olympics continue Monday. Here just some of the events that viewers can enjoy watching. (Don't forget: Tokyo is 13 hours ahead of Eastern Time in the US.)

Defending champion Novak Djokovic was in ruthless form on Friday as he beat the hardworking Denis Shapovalov to reach this year's Wimbledon final.

Matteo Berrettini put on a stunning display of power hitting to bludgeon his way past the gutsy Hubert Hurkacz and reach his first Wimbledon final.

Prince Charles, heir to the British throne, invited the band of the Coldstream Guards regiment to play instrumental versions of "Three Lions" …