Sean Sherman is the founder of The Sioux Chef, an Indigenous food education business and catering company.

A man was killed by a stray bullet while eating Thanksgiving dinner with family, authorities say

A stray bullet struck and killed a 25-year-old man who was eating Thanksgiving dinner with his family in Norristown, Pennsylvania, the Montgomery County District Attorney's Office said in a news release.

NORRISTOWN, Pa. (KMOV.com) - A 25-year-old man was hit by a stray bullet and killed while he was eating Thanksgiving dinner with his family in Norristown, Pa.

Economists blame the increase on inflation, supply chain issues and a surge of demand for food during the COVID-19 pandemic.

Parents don't think their kids are as grateful as they should be, poll finds

Four in five parents who responded to a poll from the University of Michigan Health say children today are not grateful enough.

Thanksgiving items are running out of stock -- but don't panic

Some Thanksgiving items have been out of stock in recent weeks.

FosterAdopt Connect sends out an SOS for turkeys

FosterAdopt Connect provides Thanksgiving dinners to about 200 families with foster or adopted children. But this year, their Thanksgiving meal drive is in jeopardy.

Kim Kardashian and Pete Davidson Have Dinner Together, Are 'a Little More' Than Friends, Source Says

Kim Kardashian West and Pete Davidson had dinner together in Staten Island, New York, on Tuesday night, a source tells ET. This marks the second sighting of the 41-year-old reality superstar and the 27-year-old comedian after they were snapped holding hands at Knott's Scary Farm in Buena Park, California.

Kim and Pete ate dinner at Italian restaurant Campania. Pete hails from Staten Island and told Paper magazine in 2019 that Campania is one of his favorite spots. Kim was photographed heading out to dinner on Tuesday night, wearing thigh-high boots, an oversized gray coat and sunglasses.

"Kim and Pete spent time together in Staten Island at one of his favorite spots, Campania restaurant," the source says. "Pete and Kim have been enjoying their time together and are having fun. Both are recently single and have bonded over that."

A second source tells ET, "Kim and Pete like each other. They are trying to play it off that they are just friends, but it's a little more than that right now. They're having a lot of fun together. Pete makes Kim laugh and makes her feel special. Pete is obviously thrilled and has a major crush on Kim."

A source close to Kim previously told ET that the duo were just friends.

On Friday, Kim and Pete made headlines when they were photographed holding hands while on a roller coaster at Knott's Scary Farm. They were joined at the theme park by her older sister, Kourtney Kardashian, as well as Kourtney's fiancé, Travis Barker, and a few other friends. A source told ET that the group rented out the theme park for the occasion.

"At Knott's Berry Farm, the group went on different rides, including a roller coaster, where Kim and Pete shared a cart by themselves and held hands on the ride," the source said.

According to the source, Pete and Travis are friends.

"Kim and Pete have fun together," the source said. "Pete is a friend of Travis' so it's a good time when they all get together."

Also this weekend, the Saturday Night Live star was spotted having lunch at The Beverly Hills Hotel with two male friends. "He was texting on his phone and looked very happy and giddy whenever he looked down at his phone," an eyewitness told ET. "He seemed like he was in a great mood and had a burger and fries."

The sightings of Kim and Pete come after the mother of four hosted SNL on Oct. 9. In one memorable skit, Kim and Pete shared a kiss while playing Disney's Princess Jasmine and Aladdin.

For more on Kim's hosting gig, watch the video below.

SNL: Kim Kardashian Shares a Kiss WITH Pete Davidson and Gets Flirty With John Cena!

Why Kris Jenner Was Nervous About Kim Kardashian Hosting 'SNL' 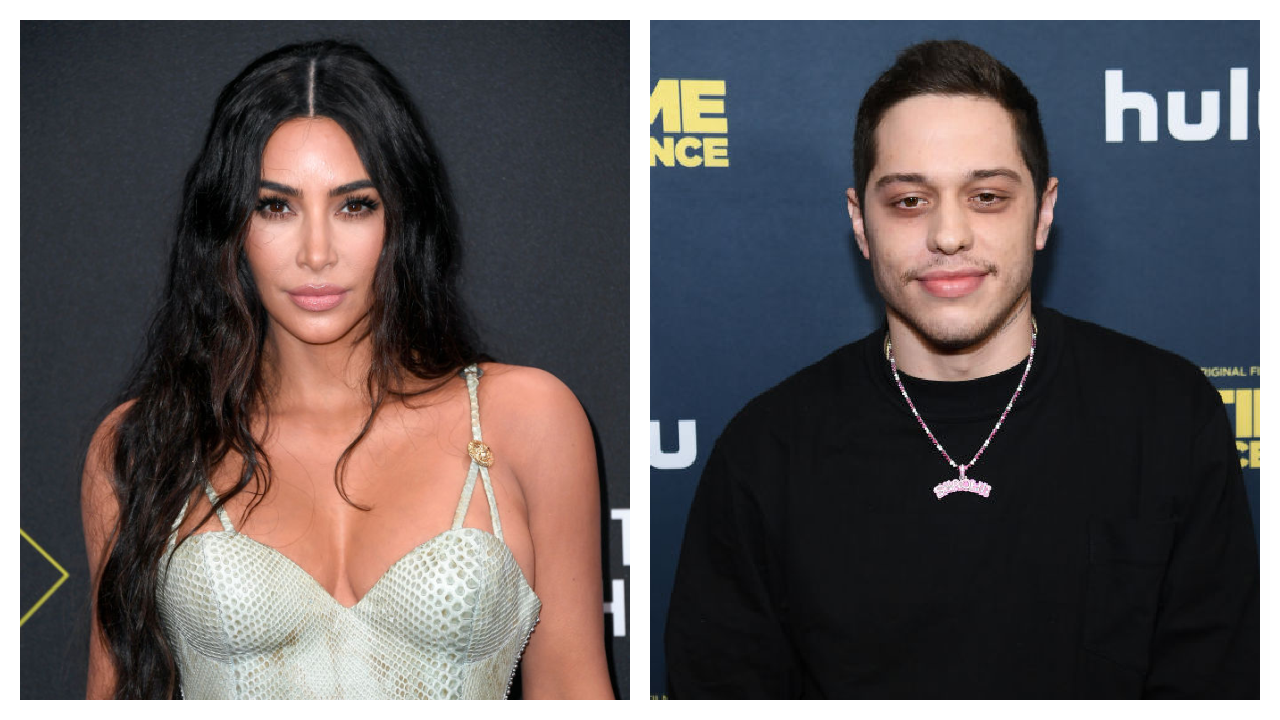