Rosalía has made her Met Gala debut! The 27-year-old Spanish singer lit up the red carpet on Monday at the 2021 Met Gala in New York City.

The theme of this year's Met Gala is "In America: A Lexicon of Fashion," an exploration of the nation's sartorial identity and a deep dive into American ingenuity.

Rosalía stunned in a gorgeous red leather ensemble -- including a striking dress, thigh-high leather boots, leather gloves and a voluminous leather cape lined in fringe that brought a remarkably beautiful flair to the event.

Rosalía was set to make her Met Gala last year, before the event was canceled due to the coronavirus pandemic. But she's continued to break boundaries. She was awarded Billboard's Rising Star Award in 2019 for "changing the sound of today's mainstream music with her fresh flamenco-influenced pop," and she's the first Spanish-singing act in history to ever be nominated for Best New Artist at the GRAMMYs. She won a GRAMMY in 2020 for Best Latin Rock, Urban or Alternative Album for El Mal Querer.

She has since collaborated with fellow superstars like Billie Eilish, Bad Bunny and Travis Scott, and even made an appearance in Cardi B and Meg Thee Stallion's much talked-about music video for "WAP." Back in 2018, she talked to ET about being part of Latina artists having a "moment."

"As a songwriter, as a producer, not just as a musician, not just as an artist who goes on stage and sings, I feel proud. I feel happy," she said. "This is something to celebrate, not just me, a lot of female artists we are having visibility and a moment. I can feel that there are more girls nominated, this year something is happening."

Bad Bunny and Rosalía Light Up 'SNL' With Romantic Performance 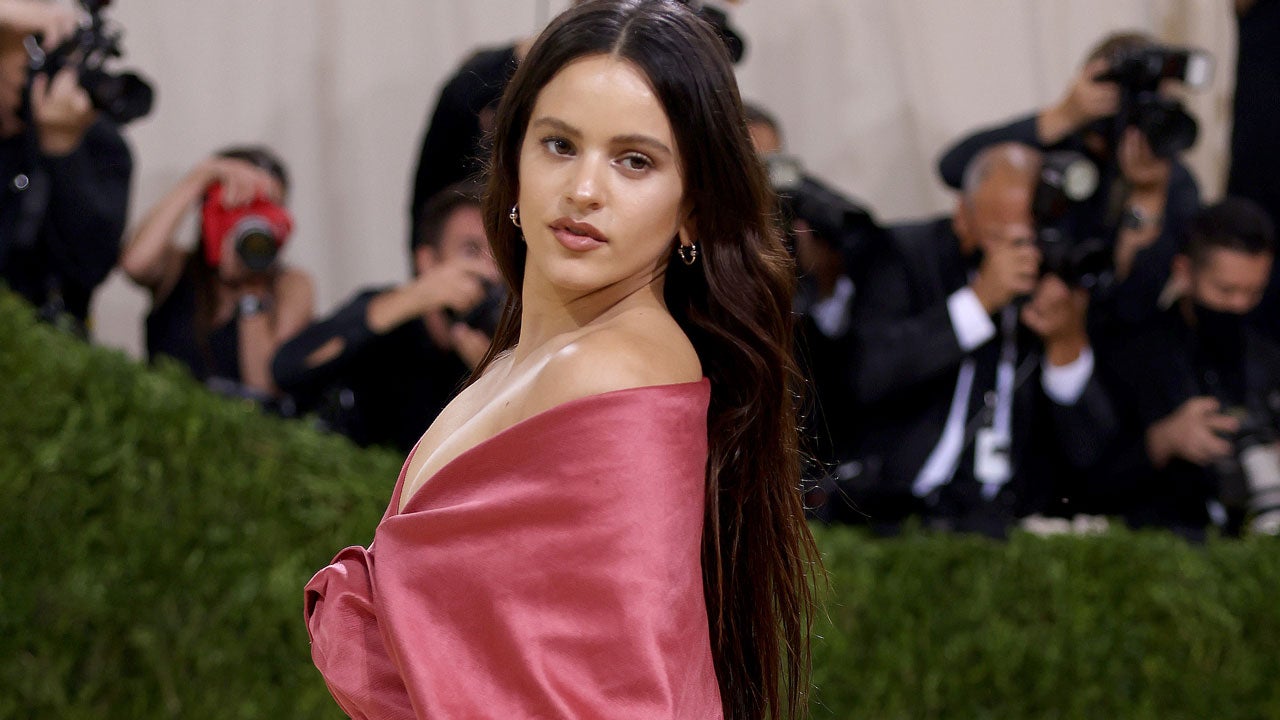 It's gonna be hard to "just dance" in those! Lady Gaga stepped out in New York City on Monday, proving that even her streetwear is chic wear. The 35-year-old Mother Monster wore a fitted black Magda Butrym ribbed knit dress and shades, but it was her sky-high platform heels that caught the attention of fashion lovers everywhere. James Devaney/GC ImagesThe 9-inch Pleaser Infinity lace-up boots placed her several heads taller than her actual five-foot, one-inch height. This isn't the first time Gaga has worn the impressive pumps. She also rocked the look on the red carpet at the 2020 MTV VMAs, pairing the platforms with a blown-out silver dress. Kevin Winter/MTV VMAs 2020/Getty Images for MTVGaga is currently in New York preparing for some upcoming shows with singer Tony Bennett, which are set to take place early next month. Bennett has been diagnosed with Alzheimer's disease and the collaborators' performances, One Last Time: An Evening With Tony Bennett and Lady Gaga, will be their final public shows together. They will take the stage at Radio City Music Hall. RELATED CONTENT:Red Carpet Game-Changers: Lady Gaga, Billy Porter, Jennifer Lopez and MoreThis video is unavailable because we were unable to load a message from our sponsors.If you are using ad-blocking software, please disable it and reload the page.Lady Gaga and Tony Bennett Announce Final Performance TogetherShop Lady Gaga's Affordable Gen Z-Approved LookLady Gaga's 'Chromatica Ball' Tour Is Postponed Until 2022

Fans watching Machine Gun Kelly's performance at the Indy 500 were surprised by a special appearance from Megan Fox on Friday. The 31-year-old musician brought his girlfriend out at Barstool Sports' party at Grand Park in Westfield, Indiana.The 35-year-old actress put her toned abs on display as she attended the event in a black long-sleeved crop top, jeans and black heels. Kelly -- who couldn't have looked prouder to have Fox by his side -- wore a black tank top, cool reflective pants and black boots. Michael Hickey/Getty ImagesMichael Hickey/Getty ImagesThe appearance is one of several Fox and MGK made together last week; including the Billboard Music Awards and iHeartRadio Music Awards.The pair definitely seems serious -- and a source tells ET earlier this month that Kelly "would marry Megan in a heartbeat."Fox "is definitely in love" with her beau, but is "having a great time with where things are at now," the source said. The pair met in March 2020 on the set of their upcoming movie, Midnight in the Switchgrass. "She really takes her kids into consideration and knows that taking that next step would be a big adjustment, but it's not off the table," the source said of the three kids  -- Noah, 8, Bodhi, 7, and Journey, 4 -- Fox shares with her ex, Brian Austin Green.As for Green, the source said he "approves" of Fox's relationship, and that the actress "is fine enough" with his current girlfriend, Sharna Burgess, who he was first linked to in December.See more in the video below. RELATED CONTENT: Machine Gun Kelly Dyes Tongue Black and Makes Out With Megan Fox at BBMAsThis video is unavailable because we were unable to load a message from our sponsors.If you are using ad-blocking software, please disable it and reload the page.Machine Gun Kelly Shows Off Super Long Nails at iHeartRadio AwardsMachine Gun Kelly and Megan Fox Pack on PDA at Billboard Music AwardsMachine Gun Kelly Would Marry Megan Fox in 'a Heartbeat,' Source Says

A pair of Lionel Messi's boots have been sold for charity for $173,000, auction house Christie's said on Friday.

A Silver Alert has been issued for a missing woman out of KCK.

Among all the types of footwear deemed as "classics," none seem to compare to stylish black boots. Thanks to the range of options that make up this timeless trend -- short and flat black ankle boots, knee-high boots with heels, something in between, you name it -- there's no doubt that there's a style (or maybe two or three) that will fit seamlessly into anyone's closet. And if you're searching for a new pair to add to your collection, you're in luck: there are plenty of fashion-forward options to chose from -- many of which are on sale right now.As you start to transition your wardrobe from winter to spring, there couldn't be a better time to add a pair of classic black boots to your wardrobe. Whether that's in the form of booties like a cool Chelsea boot style, edgy combat boots or a dressier leather or suede heeled boot, there's a look that'll go with any outfit -- whether that involves a pair of sleek skinny jeans or pleated midi skirt.So, what are you waiting for? The perfect pair of black boots eagerly wait ahead. And when they're on sale, there's no better time to grab them while you can.From short and sweet ankle booties to timeless knee-high boots, scroll down to shop ET Style's top picks for black boots on sale below.Steve Madden Ramon Black LeatherSteve MaddenSteve Madden Ramon Black LeatherA solid pair of combat boots always gives an outfit -- whether it's casual or formal -- a cool edge.$60 AT STEVE MADDEN (REGULARLY $100)Buy NowTory Burch Lila Knee BootTory BurchTory Burch Lila Knee BootScrunch these knee-high boots up or down. Either way, there's no going wrong here.$279 AT TORY BURCH (REGULARLY $548)Buy NowTibi Collier BootsShopbopTibi Collier BootsCroc-embossed anything always looks ultra-chic. Style these with your favorite jeans or wear them with a midi skirt or dress.$425 AT SHOPBOP (REGULARLY $850)Buy NowBY FAR Linda BootsShopbopBY FAR Linda BootsBy Far puts a cool and modern spin on the classic black ankle boot with sleek, patent leather.$240 AT SHOPBOP (REGULARLY $600)Buy NowEverlane The Boss BootEverlaneEverlane The Boss BootIf you're looking for an everyday ankle boot to pull on at a moment's notice, these Everlane boots are it. And with the pointed toe, they're sharp enough to dress up or down.$138 AT EVERLANE (REGULARLY $198)Buy NowRag & Bone Brynn BootRag & BoneRag & Bone Brynn BootWhen you already have simple everyday leather ankle boots, go for a suede pair like these heeled booties from Rag & Bone to mix things up.$270 AT RAG & BONE (REGULARLY $450)Buy NowCoach Fynn BootCoachCoach Fynn BootFlat leather riding boots are just what you need for everyday errands. Wear them with a pair of skinny or straight-leg jeans and a crewneck sweater for a classic transitional outfit.$135 AT COACH (REGULARLY $225)Buy NowMadewell The Ivy Chelsea Boot in LeatherMadewellMadewell The Ivy Chelsea Boot in LeatherAn easy pair of boots to slip on and off is always a welcome addition to anyone's closet. And this casual option from Madewell will go with every casual outfit you wear.$180 AT MADEWELL (REGULARLY $198)Buy NowStuart Weitzman The Tieland BootieStuart WeitzmanStuart Weitzman The Tieland BootieStuart Weitzman's luxurious take on the popular sock boot features soft Napa leather that'll hug your foot. $238 AT STUART WEITZMAN (REGULARLY $595)Buy NowAnthropologie Shane Lace-Up BootsAnthropologieAnthropologie Shane Lace-Up BootsWear these lace-up boots with a pair of vintage-inspired jeans, or style them with a romantic dress for spring.$110 AT ANTHROPOLOGIE (REGULARLY $150)Buy NowFree People Carney Lace-Up BootsFree PeopleFree People Carney Lace-Up BootsThe lace-up detail gives these patent black boots a cool, retro feel.$100 AT FREE PEOPLE (REGULARLY $170)Buy NowRELATED CONTENT:Best Winter Boots to Wear Now Until SpringBlack-Owned Businesses in Fashion and Beauty to SupportCoach x Champion Collection: Shop the Sporty CollabThe Uggs Celebs Can't Stop Wearing -- Shop the Trendy BootsThe Best Fashion Picks at Walmart -- Including TikTok Favorites

There's a new pair of UGGs celebrities are loving right now. Stylish stars such as Emily Ratajkowski, Kendall Jenner, Joan Smalls and Irina Shayk have all been spotted rocking the UGG Classic Ultra Mini -- a shorter, mini version of the classic comfy slip-on bootie that became a footwear staple in the early 2000s. The mini UGGs are a cooler take on the iconic UGG silhouette -- which is undoubtedly cozy and soft on the feet. Celebs love wearing the boot while out and about on their off-duty days. The versatile design goes with a variety of looks such as leggings, shorts and dresses. It's the perfect shoe to easily slip on and off for winter, too. The boot is pre-treated to repel lightweight water and has a durable sole to walk in. Jose Perez/Bauer-Griffin/GC ImagesJared Siskin/WireImageJared Siskin/GC ImagesThe mini also comes in the taller, ankle version called the Classic Mini II. Shop the celeb-approved UGG boots below. UGG Classic Ultra MiniUGGUGG Classic Ultra Mini$140 AT UGGBUY NOWUGG Classic Mini II BootUGGUGG Classic Mini II Boot$150 AT UGGBUY NOWRELATED CONTENT:Get Selena Gomez's Perfectly Slouchy Winter CoatThe Best Amazon Lululemon Dupes We've Found on TikTokColorful Winter Clothes to Keep You CheerfulThe Warmest Winter Coats for Snowy WeatherThe Best Valentine’s Day Outfits for Every Type of Date