Music's biggest names are heading back to the desert this year! A source tells ET that Kanye "Ye" West, Billie Eilish and Harry Styles are slated to headline the 2022 Coachella Valley Music and Arts Festival in Indio, California.

Billboard is also reporting that Swedish House Mafia will be performing.

The music festival has not taken place since 2019. The last scheduled Coachella was to take place in April 2021, but was again moved to October 2021 due to the COVID-19 pandemic. It was ultimately canceled entirely.

That iteration was to be headlined by Rage Against the Machine, Frank Ocean and Travis Scott. Last month, it was reported that Scott would no longer be headlining the music festival following the fatal Astroworld tragedy in Houston, Texas.

Currently, this year's Coachella is scheduled to take place from April 15 to April 24.

Ye was last at Coachella in 2019, and performed his Sunday service. Here's a look back at that moment. 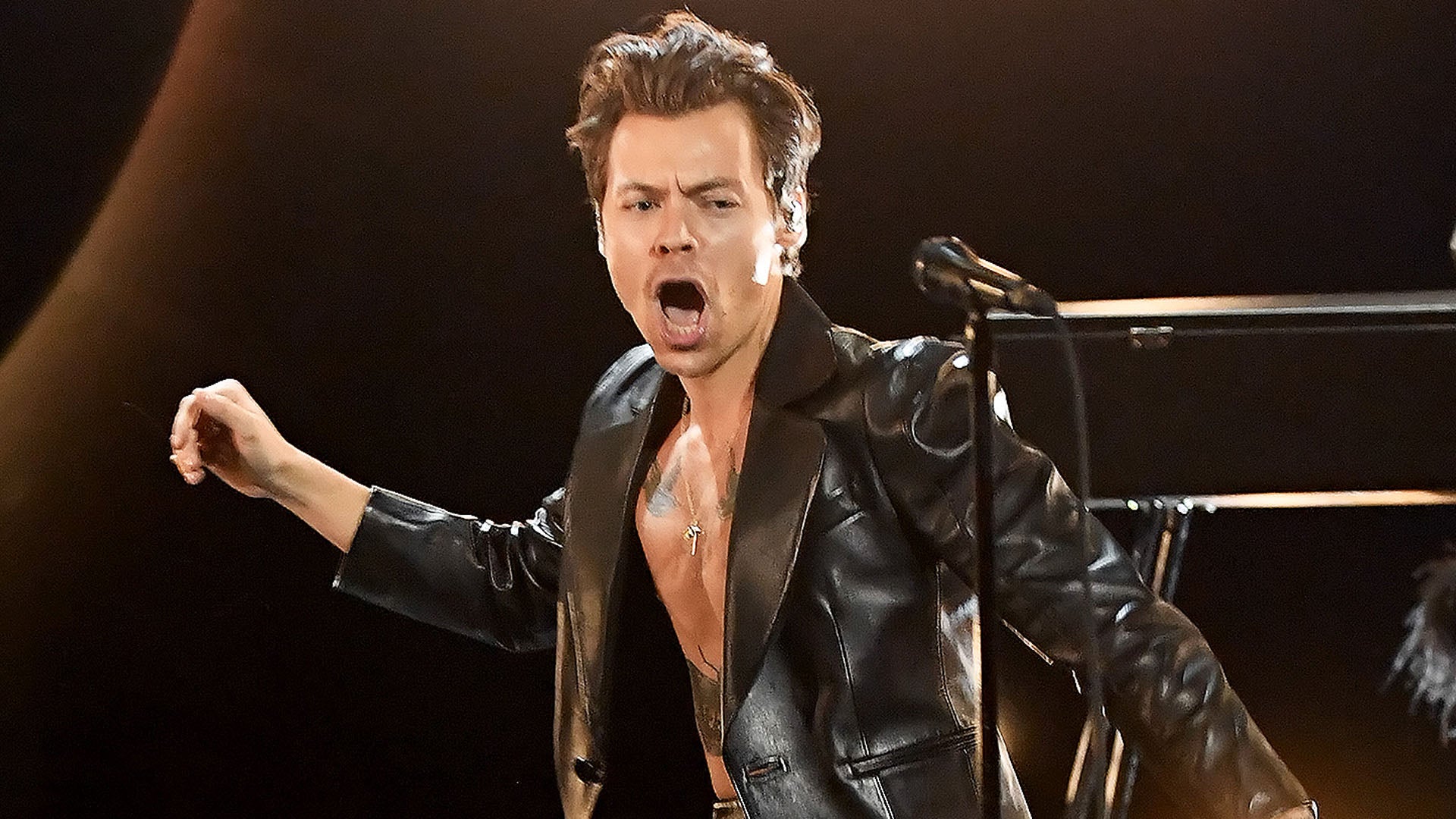 From 'Chipotle' to 'Eilish,' these are the words we mispronounced the most this year

Words are hard. Using them properly in a sentence is one thing, but saying them out loud? Even harder. "Cheugy" doesn't even look like it should be a word!

GRAMMYs 2022: Listen to the Album of the Year Nominees

Each product has been independently selected by our editorial team. We may receive commissions from some links to products on this page. Promotions are subject to availability and retailer terms.

The 2022 GRAMMY nominations are here, and with them, a new crop of Album of the Year nominees. The 2022 nominees are a pop-heavy bunch, featuring the category's defending winner Taylor Swift -- here this year with folklore's sister album, evermore -- as well as the 2020 AOTY winner, Billie Eilish. Chart-toppers like Lil Nas X, Justin Bieber and Doja Cat are also in the mix, along with this year's breakout rookie, Olivia Rodrigo, who following in Eilish's footsteps, earning a nod in each of the Big 4 categories for her debut, Sour.

Surprises this year include Jon Batiste -- who snuck up on the odds-makers with the most nominations of any artist this year -- as well as Kanye West's long-gestating Donda album and Lady Gaga's final collaboration with Tony Bennet making the cut. This year's AOTY nominees span a variety of sounds, leaving even the most well-versed music fan with something to discover.

The Golden Gramophones will be handed out during the 64th Annual GRAMMY Awards, taking place Monday, Jan. 31, 2022, and airing live on CBS and Paramount+ at 5 p.m. PT/ 8 p.m. ET. Until then, check out all of this year's Album of the Year nominees, plus where you can stream them now.

We Are - Jon Batiste

Happier Than Ever, Billie Eilish

The 64th Annual GRAMMY Awards will take place on Monday, January 31, 2022 at 8 p.m. ET / 5 p.m. PT and broadcast live on CBS and Paramount+. Follow along at ETonline.com for everything you need to get ready for music's biggest night, including how to watch, GRAMMYs performers and more.

Adele Recalls Her Private Talk With Beyonce After 2017 GRAMMYs 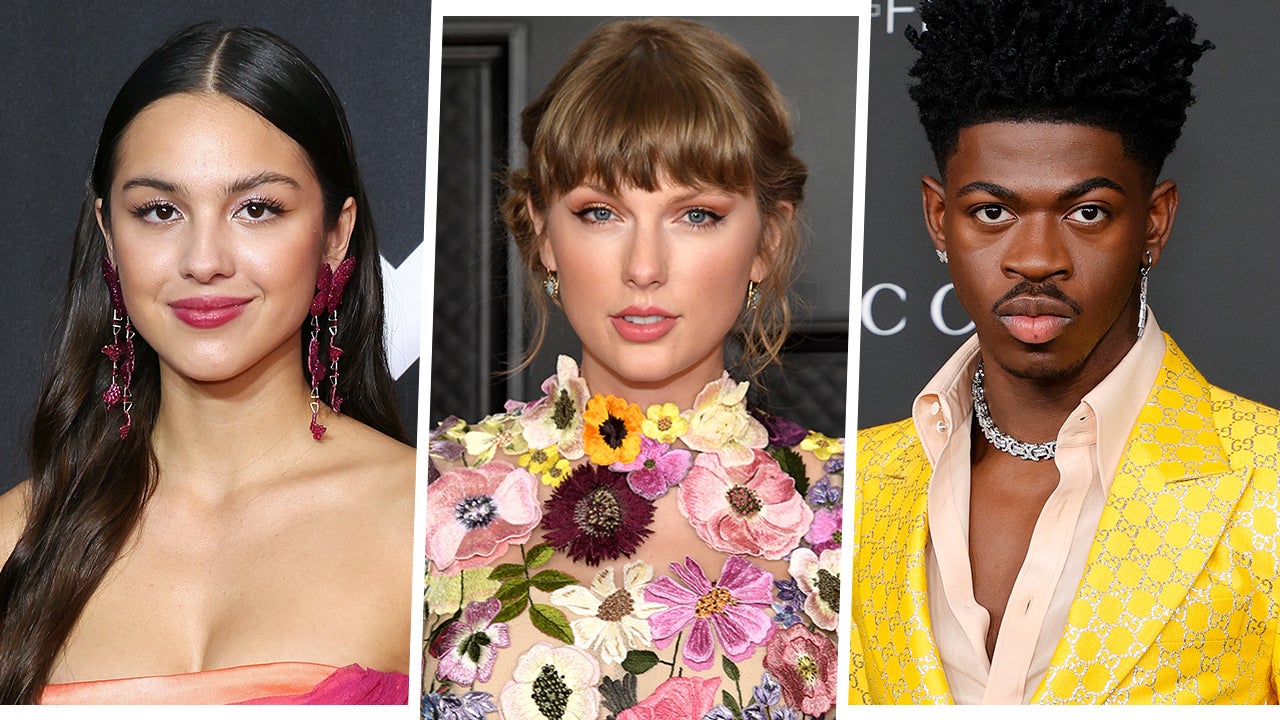 Billie Eilish is not much of a rule follower, so when it came time to meet members of the royal family, the 19-year-old GRAMMY winner admitted she wasn't exactly sticking to protocol.

While a guest on Wednesday's episode of Jimmy Kimmel Live, host Kimmel asked Eilish about meeting the royals at the world premiere of the new James Bond film, No Time to Die.

"I assume they read you the rules and all that stuff before you met them?" Kimmel asked.

"Oh yeah. Oh yeah. There was a whole list of things," Eilish, who wrote and sings the theme song for No Time to Die, said of meeting Kate Middleton, Prince William, Prince Charles, and Camilla, the Duchess of Cornwall.

"Did you pay attention to those rules?" Kimmel asked, prompting Eilish to mouth "No."

"But I tried to. I was planning on it and they were just so normal," Eilish added. "They didn't make me feel like, 'Oh, I'm scared, I can't talk to them.' They were very complimentary and they had all these questions for me. They were just very friendly and funny and sweet. I don't know, I can't complain. It was amazing."

Eilish was photographed shaking hands and chatting with the royals, and she wasn't the only one. Rami Malek has also been very vocal about his interactions with the royal family both at the Bond premiere and at the BAFTA Awards.

"For me, I just try to treat them like I would anybody else," Malek recently told ET of the royals. "I'm sure a dose of normality is probably something that is quite refreshing to them."

He added that he tries to ask the Duke and Duchess of Cambridge about themselves whenever he sees them.

"I remember we were at the BAFTAS, and I met them and they have a lot of questions to ask you," he recalled. "But it is nice to just say, 'How are you doing? How are you dealing with all of this? I know you just had kids, one kid, specifically.' So, just try to be normal because they live a very unusual life I imagine."

Rami Malek Shares His Approach to Speaking With Royals 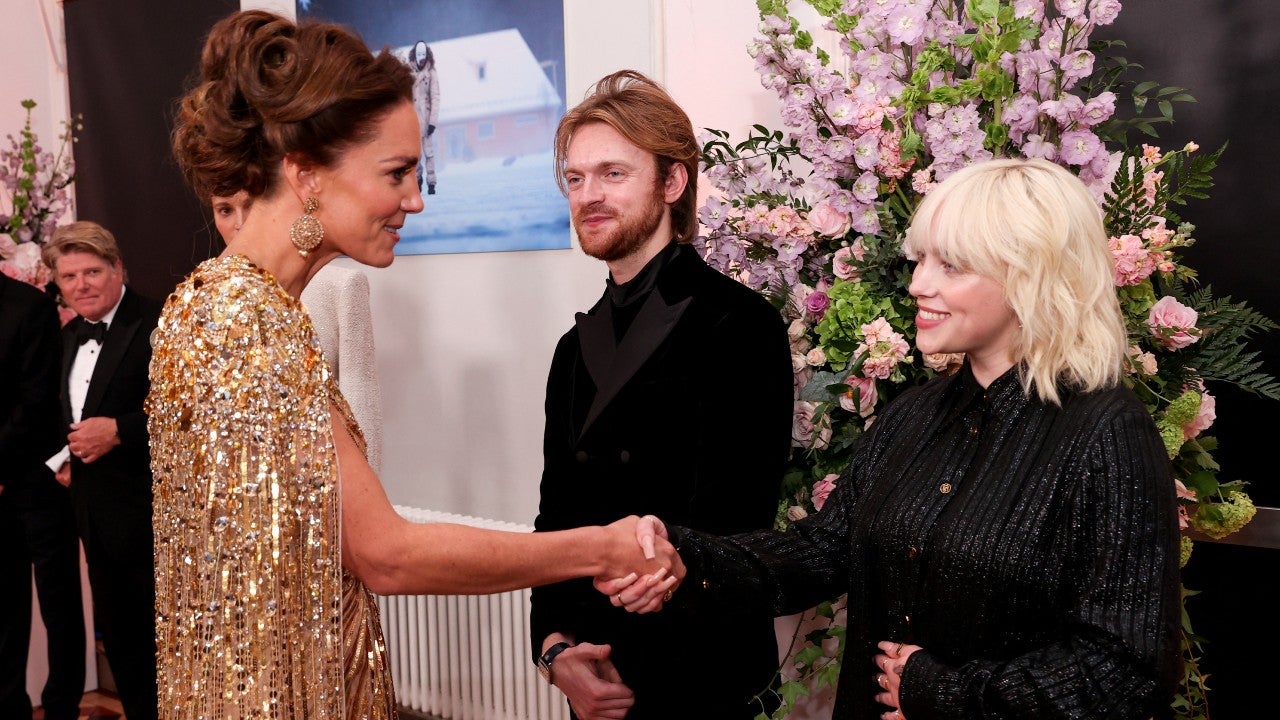 Zoë Kravitz is stunning in a see-through embellished dress. The 32-year-old actress walked the red carpet for the 2021 Met Gala at the Metropolitan Museum of Art on Monday night, soon after Channing Tatum arrived.

Kravitz turned heads in a sparkly crystal shell dress by Saint Laurent, styled with a bedazzled thong, ankle-strap sandals and drop earrings. The star kept her makeup simple and natural-looking, and her hair was swept into an updo.

Tatum, meanwhile, looked handsome in a classic tuxedo and bowtie.

Kravitz and Tatum sparked romance rumors after being spotted in New York City together in August. A source tells ET, "Zoe and Channing are dating. It started out as a friendship and eventually turned to be more."

Kravitz and Tatum are currently working together. Tatum stars in Pussy Island, a thriller Kravitz co-wrote.

The new relationship comes after Kravitz's divorce from actor Karl Glusman became official. The Big Little Lies actress filed for divorce on Dec. 23, after a year and a half of marriage.

The Met Gala returns after a hiatus in 2020 amid the coronavirus pandemic. This year's theme and exhibition is "In America: A Lexicon of Fashion," an exploration into America's sartorial identity. Tonight's event is co-chaired by Gen Z stars Amanda Gorman, Naomi Osaka, Timothée Chamalet and Billie Eilish.

See all 2021 Met Gala red carpet arrivals in the gallery below. 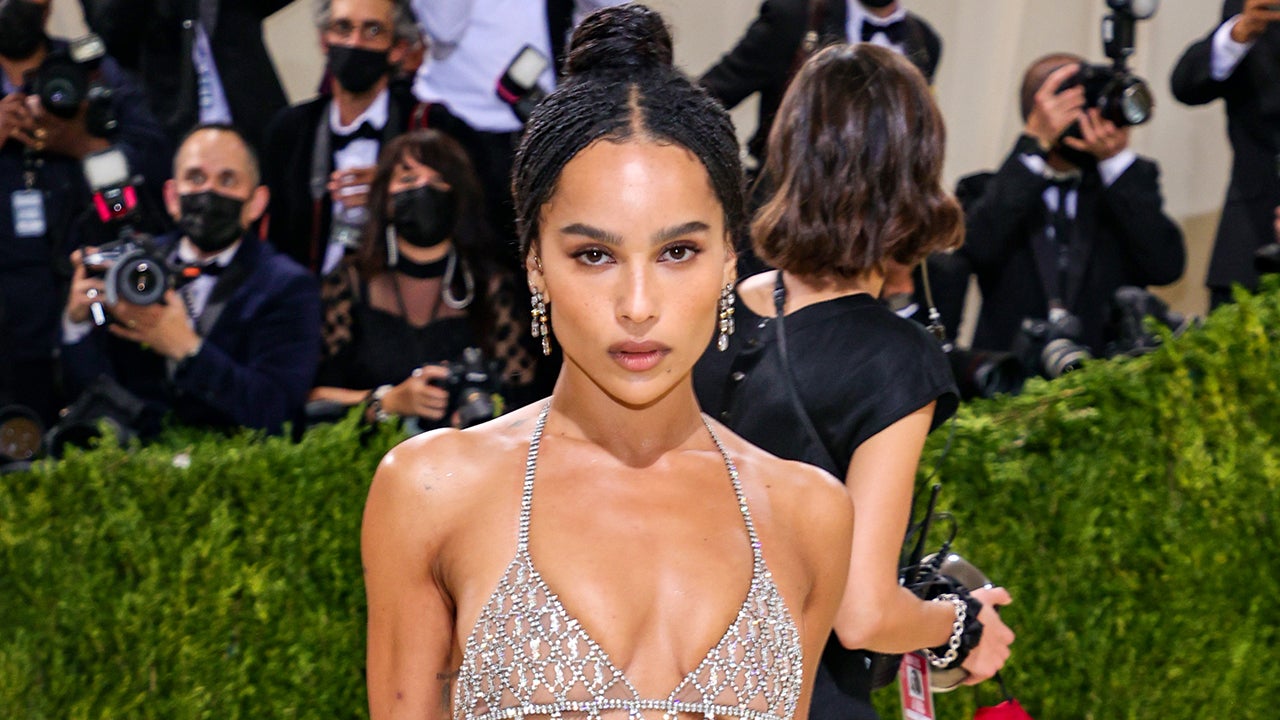 From Billie Eilish to Megan Fox: See the Best Dressed at the 2021 Met Gala

Celebs like Megan Fox, Jennifer Lopez and Jennifer Hudson brought their A-game to the famous red carpet at the Metropolitan Museum of Art in New York City on Monday, while stars like Ciara, Ben Platt and Lupita Nyong’o truly embraced this year's theme, "In America: A Lexicon of Fashion," an exploration of the nation’s sartorial identity and a deep dive into American ingenuity.

Meanwhile, Dan Levy was one of the first to hit the red carpet, where he made a powerful, globe-trotting LGBTQIA+ statement in a custom JW Anderson and Loewe suit.

And that aforementioned Ciara look? No less than a sequined football jersey-inspired gown with cut-outs at the hips. Though she didn't rock her husband, Russell Wilson's, jersey number (she wore a "3," most likely in honor of her children, whereas the Seattle Seahawks quarterback dons a "12" on the field), she was sporting her hubby's Super Bowl ring! She completed her look with an on-theme football-shaped clutch.

These weren't the only stars who wowed on Monday night. Click through the gallery below to see every celeb who made the best-dressed list on fashion's biggest night.

Met Gala 2021: Everything to Know About Fashion's Biggest Night Out 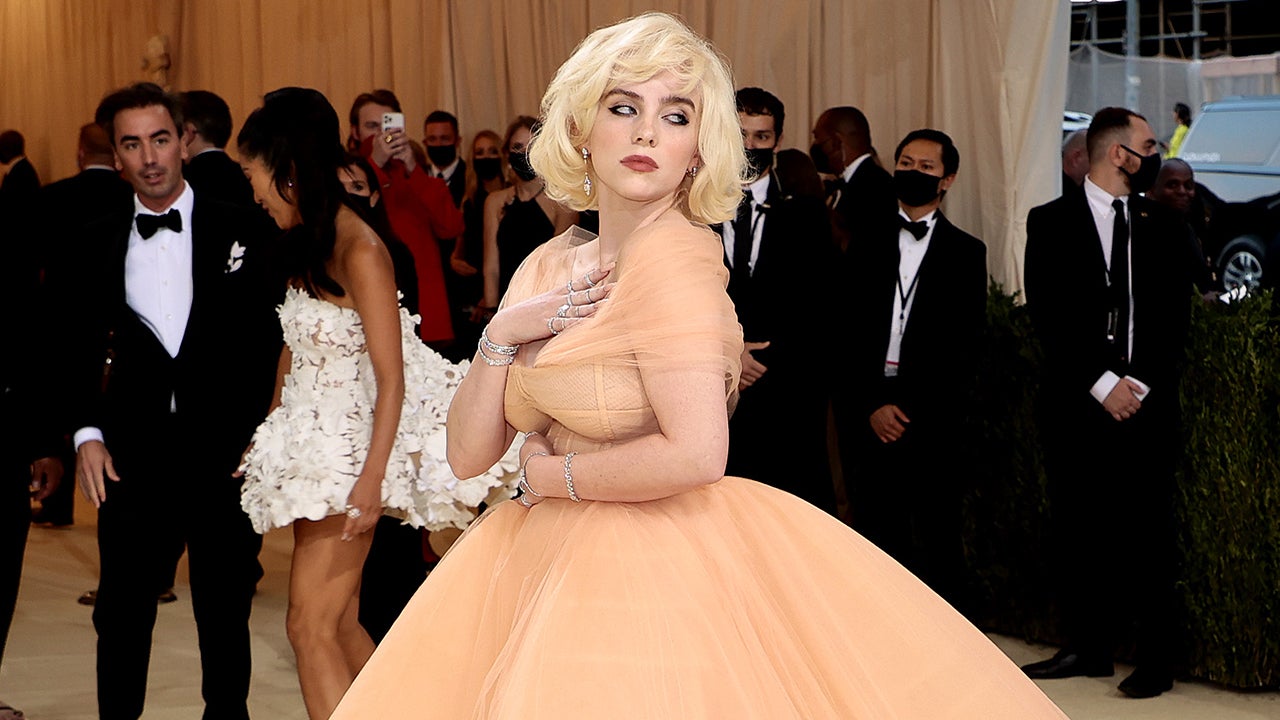 Pop culture's most famous faces descended on the The Metropolitan Museum of Art on Monday evening to celebrate the fashion industry's party of the year: the Met Gala.

The 2021 MTV Video Music Awards will be presented Sunday.

Met Gala 2021: Everything You Need to Know Ahead of Fashion's Biggest Night Out

The Met Gala is on its way!

After last year's event was postponed and later canceled due to COVID-19 concerns, fashion's biggest night returns with what is expected to be a more intimate affair than usual.

In less than one week, the biggest names in entertainment will reunite at the Metropolitan Museum of Art in New York City. Celebrities like Jennifer Lopez, Kim Kardashian, Lady Gaga and Rihanna have all graced the famous Met Ball red carpet over the years with sensational looks -- and this year will be no different!

From this year's patriotic theme to who you can expect to see posing on the famous Met stairs, ET is breaking down everything you need to know ahead of fashion's biggest night.

What is it?: Held annually on the first Monday in May, the glamorous fashion soirée (formerly known as the Costume Institute Gala) aims to raise funds for the Metropolitan Museum of Art each year. It's also referred to as the Met Ball and marks the opening of the institute's spring fashion exhibit.

What is this year's theme?: The theme of this year's Met Gala will be "In America: A Lexicon of Fashion," an exploration of the nation’s sartorial identity and a deep dive into American ingenuity. According to the press release, the exhibition opens Sept. 18 and will highlight "everything from the luxe ease of Halston's '70s glamour to Rodarte's ethereal edge and Kerby Jean-Raymond's powerful political vision for Pyer Moss."

The last time the event took place was 2019, with the theme being "Camp: Notes on Fashion," curated by Andrew Bolton and based on Susan Sontag's 1994 essay, "Notes on Camp." Before it was canceled, the 2020 Met Gala would have seen French designer Nicolas Ghesquière of Louis Vuitton joining actors Lin-Manuel Miranda, Emma Stone and Meryl Streep as co-chairs.

As for the theme, About Time: Fashion and Duration, the concept was going to "trace more than a century and a half of fashion, from 1870 to the present, along with a disruptive timeline, as part of the museum's 150th anniversary celebration." The exhibition ran from Oct. 29, 2020 through Feb. 7, 2021.

Relive past Met Gala looks in the video below.

2020 Met Gala Is Officially Canceled After Initially Being Postponed 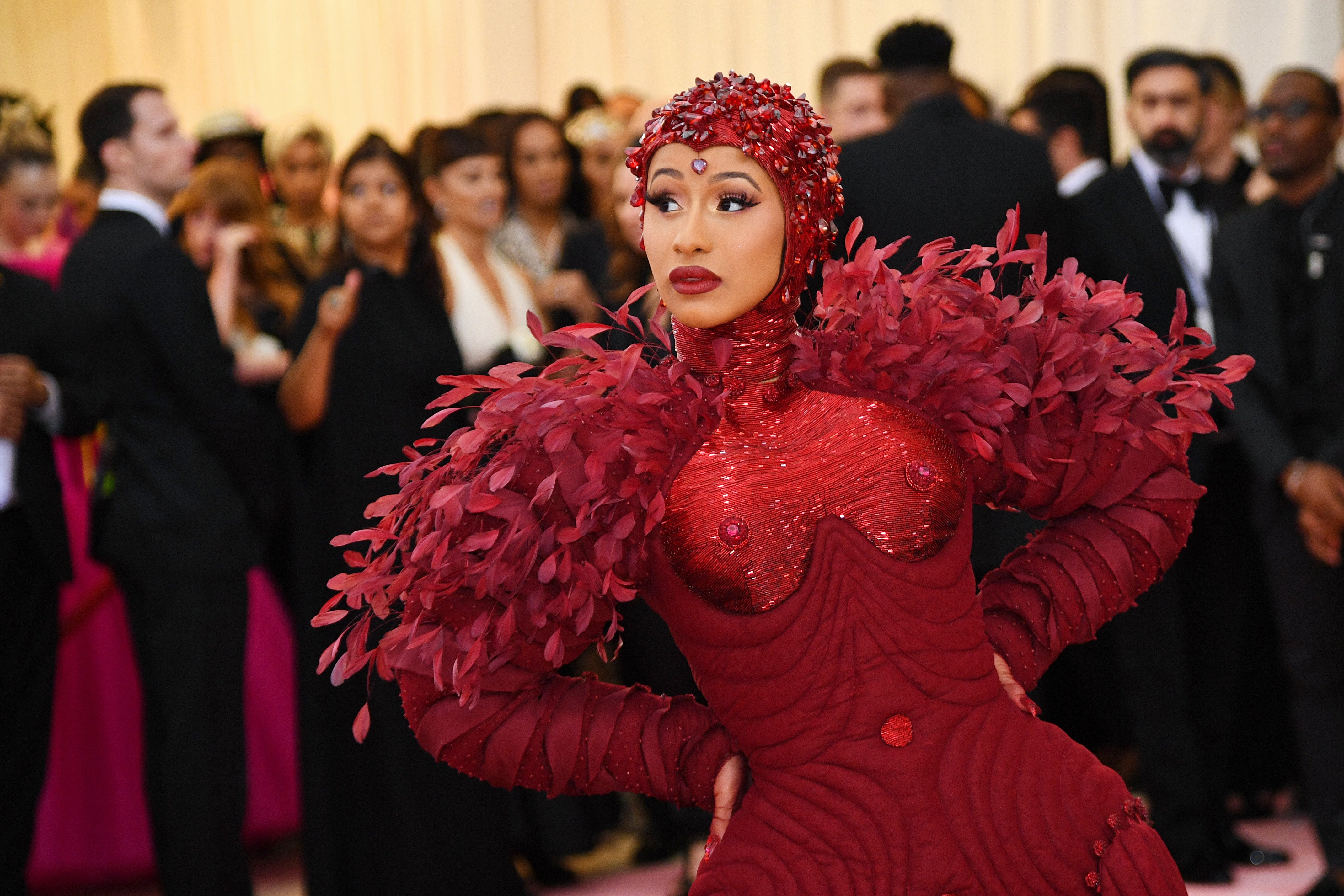